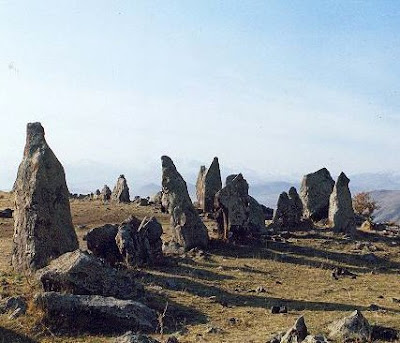 A section of a circle of monoliths at Carahunge.
There are possible Neolithic connections between Carahunge ~ a large collection of uprighted stones near Sisan, Armenia ~ and England’s famed Stonehenge on the Salisbury Plain.

Carahunge ~ meaning "speaking stones" ~ is located 200 km from the Armenian capital Yerevan, near a town called Sisian. There are over 200 stones on the seven-hectare site and many have smooth angled holes in them, directed at different points in the sky, leading scientists to believe it may be the world’s oldest observatory, dating back 7,500 years.

A carving found on rocks near Lake Sevan shows that Neolithic Armenians knew the world was round, they could accurately measure latitude and were already skilled in astronomy, archaeology and engineering. One theory is that the earliest population of Britain, who perhaps came from Armenia, brought the ideas of Carahunge with them and played a role in the creation of Stonehenge and other European sites.