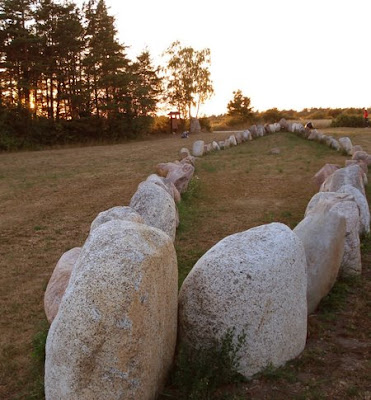 Viking grave in longboat shape in Sweden.
A study of thousands of excavated Viking graves suggests that rituals were performed at the graveside in which stories about life and death were presented as theatre, with live performances designed to help the passage of the deceased from this world into the next.

Neil Price, head of archaeology at the University of Aberdeen, believes these rituals may have been the early beginnings of the Norse sagas, telling stories about men and gods in the pagan world. He says a close study of the graves and the artifacts they contained ~ as well as contemporary accounts of Viking funerals ~ presents a far more complex picture of their lives than the simple myth of the Viking raider.

Price said that the burial rituals suggested the Vikings had no defined religion, but instead made up a set of spiritual beliefs, which were then acted out at the graveside. “There seem to have been something like stage directions dictating how these rituals were to be enacted,” he said. “Eyewitness accounts suggest that there were as many as ten days of ritual, with enormous time and effort put into the performances.” 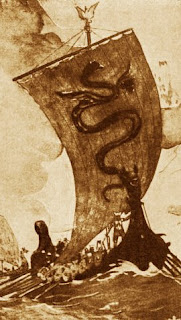 Detailed analysis of the burials revealed a remarkable variety of objects found alongside the bodies, from everyday items to great longships, wagons and sledges, together with animals of many different species and even human sacrifices.

“No two graves were the same,” Price says. Some bore evidence of a military career, with whole ships containing the corpse left open. Other graves were found to have had animal remains ~ one had no fewer than 20 decapitated horses ~ and occasionally there were human remains as well. Some Vikings were buried with their wives and families, others were laid to rest in more simple single graves.

“What emerges from these studies is that these were an immensely sophisticated people, with a complex set of beliefs, and a strong interest in poetry. It was an utterly different world from ours,” Price says. “They were aggressively pagan, and strongly anti-Christian, perhaps as a reaction to the Christian missionaries. But there is great richness in this non-Christian world.”

Most of the existing records on Norse mythology date from the 11th to 18th centuries, having gone through more than two centuries of oral tradition that is thought to carry the seeds of Germanic legends such as the Valkyrie, the Niebelungen and Siegfried.

Click here for the London Times article.
Posted by Gregory LeFever at 9:36 AM