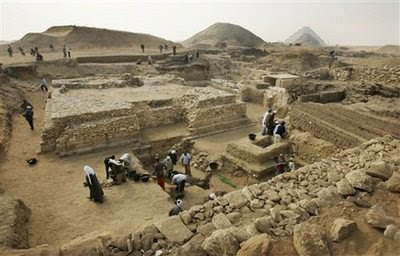 The base of the newly discovered pyramid. 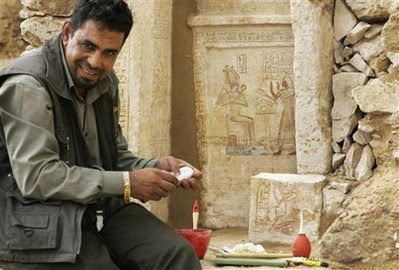 An archaeologist cleans hieroglyphics found on the pyramid.
Egypt chief archaeologist Zahi Hawass today announced the discovery of a 4,300-year-old pyramid in Saqqara, the sprawling necropolis and burial site of the rulers of ancient Memphis.

The pyramid ~ the 118th discovered so far in Egypt ~ is believed to belong to Queen Sesheshet, mother of King Teti who was the founder of the 6th Dynasty of Egypt's Old Kingdom, according to the Associated Press.

Hawass' team has been excavating the site in Saqqara ~ about 12 miles south of Cairo ~ for two years. He says the discovery was only made two months ago when it became clear that the 16-foot-tall structure uncovered from the sand was a pyramid.
Posted by Gregory LeFever at 9:03 AM