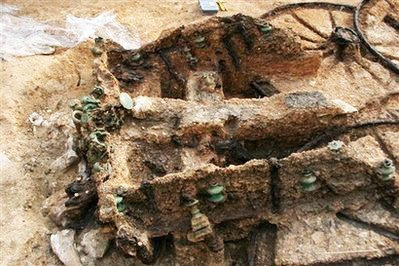 The ornamental chariot is about four feet wide with its wheels. 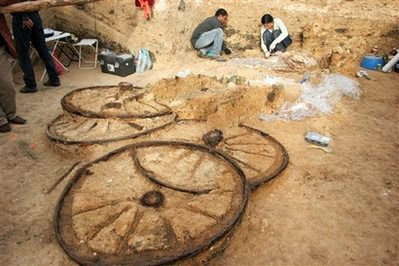 Archaeologists unearth the chariot at the site of the Thracian aristocrat's tomb.
Archaeologists have unearthed an elaborately decorated 1,800-year-old chariot at an ancient Thracian tomb in southeastern Bulgaria.
"The lavishly ornamented four-wheel chariot dates back to the end of the second century AD.," Veselin Ignatov, who heads the excavation, told The Associated Press from the site near the village of Karanovo.
The bronze-plated wooden chariot is decorated with scenes from Thracian mythology, including figures of a jumping panther and the carving of a mythological animal with the body of a panther and the tail of a dolphin. With wheels, it measures four feet across. It was found during excavations in a funerary mound believed to be the grave of a wealthy Thracian aristocrat.
First mentioned in Homer's Iliad as allies of Troy, the Thracians were an Indo-European nomadic people who settled in the Balkans 5,000 years ago. They were conquered by Rome in the 1st century and were assimilated by invading Slav peoples in the 6th century. They had no written language, and so left no records. Fierce warriors and horse-breeders, the Thracians were also skilled goldsmiths. They established a powerful kingdom in the 5th century BC.

Posted by Gregory LeFever at 2:24 PM

The grave looting is a plague of the archeology since the beginning of time.

According to a new study conducted by the Bulgarian Center for the Study of Democracy, as many as 250,000 people may be involved in illegal racketeering. Some are even brazen enough to put their pieces on show. The most controversial is casino king Vassil Bozhkov, 51, nicknamed "The Skull", who, in addition to countless gambling houses in Sofia, also runs the popular betting agency Eurofootball. He has already survived one assassination attempt, while one of his closest business partners was killed by a gunman.