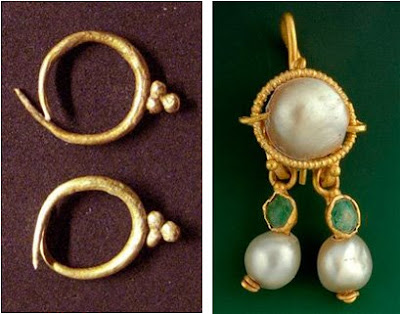 Ancient earrings are in the news these days, with two significant finds within days of each other.
A 2,300-year-old pair of earrings (at left in photo) was discovered in Spain during archaeological excavation work at the necropolis Coimbra del Barranco Ancho in Jumilla.  Archaeologists believe the grape-cluster design on the earrings is related to the millennia-old winemaking activities in the region.

In Jerusalem, archeologists have discovered a 2,000-year-old gold earring (at right in photo) beneath a parking lot next to the walls of Jerusalem's old city. It is inlaid with pearls and emeralds and was made sometime between the first century BC and the beginning of the fourth century AD.
The earring was discovered during excavation of the ruins of a building from the Byzantine period, dating from around the fifth century AD. It appears to have been crafted using a technique similar to that depicted in portraits from Roman-era Egypt.

Posted by Gregory LeFever at 10:45 AM