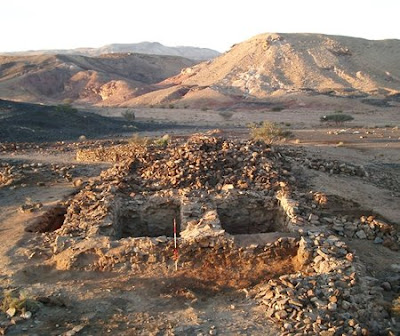 Excavation at the gate of Khirbat en-Nahas, where the copper-mining culture existed in the 10th Century BC.
Archaeologists have determined that a copper-producing society existed in southern Jordan nearly twelve centuries years ago, pointing to the controversial possibility that Israel’s King David and his son Solomon controlled copper production, as contended in the Old Testament.
A long-disputed claim that King Solomon’s copper mines were located near the Jordanian site must now be taken seriously, a team of archaeologists report in the October 28 Proceedings of the National Academy of Sciences.
The Edomite lowlands, home to a large copper ore zone, have been ignored by archaeologists because of the logistical difficulties of working in this hyper-arid region. But with an anthropological perspective, and using high precision radiocarbon dating, this new research demonstrates two major phases of copper production—during the 12th to 11th centuries B.C. and the 10th to 9th centuries B.C. In this period evidence was found of construction of massive fortifications and industrial scale metal production activities, as well as over 100 building complexes.
“We have conclusively shown that industrial-scale copper production occurred at this site in the 10th and ninth centuries B.C., which resonates with Old Testament descriptions of vibrant, complex societies in the same area at that time,” says team leader Thomas Levy of the University of California.
Click here for the article in Science News.
Click here for an article from the  University of California.
See the video!
Here is an excellent video of the Solomon-era findings, including comments by Thomas Levy and some critics of some of the conclusions. The video is 12 minutes long.
Posted by Gregory LeFever at 6:45 PM