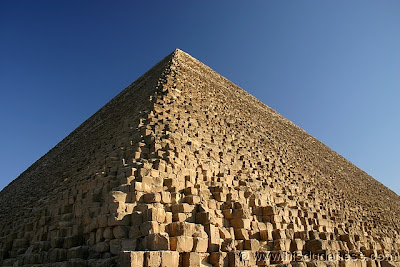 French architect Jean-Pierre Houdin is calling for new scientific exploration of the Great Pyramid of Giza to locate two chambers housing funereal furniture plus a previously overlooked passage that enabled funeral parties to exit the pyramid.
Houdin says 3-D simulation and data from US egyptologist Bob Brier points to two secret chambers in the heart of the structure. The rooms would have housed furniture for use in the afterlife by the pharaoh Khufu, also known as Cheops in Greek, he told a press conference this week.
“I am convinced there are antechambers in this pyramid,” he said. “What I want is to find them.”

In March 2007, Houdin advanced the theory that the Great Pyramid had been built inside-out using an internal spiral ramp, as opposed to an external ramp as had long been suggested.

He proposed mounting a joint expedition of Egyptian antiquities experts and French engineers, using infrared, radar and other non-invasive methods to check out the hypothesis.

The idea was nixed by Egypt's antiquities department. A Canadian team from Laval University in Quebec will seek permission this year to carry out thermal imaging from outside the Pyramid to explore the theory, Houdin said.

Houdin said a pointer to the antechambers came from the existence of such rooms in the pyramid of Snefru, Khufu's father. It was possible a similar design was retained for the Great Pyramid.
Click here for the complete article.
Posted by Gregory LeFever at 5:40 PM