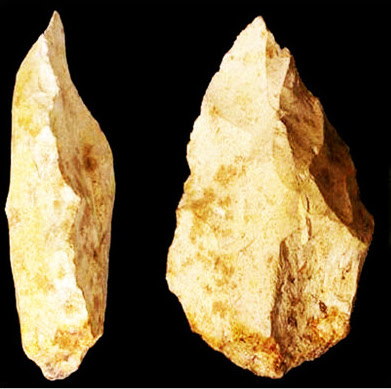 Two artifacts from United Arab Emirates indicate early human residents.
New research indicates that early humans may have left Africa earlier than previously thought, but still doesn’t answer if they got any farther than Arabia. The most comprehensive genetic data so far available, based on material called mitochondrial DNA, indicates that all modern humans outside Africa are descended from a single, small population that left Africa less than 60,000 years ago, but even that data may be unreliable.
According to the New York Times:

The present view, based on both archaeological and genetic evidence, holds that modern humans, although they first emerged in Africa some 200,000 years ago, were hemmed in by deserts and other human species like Neanderthals and did not escape to the rest of the world until some 50,000 years ago.

An archaeological team led by Hans-Peter Uerpmann of the University of Tübingen in Germany now reports the discovery of stone tools 127,000 years old from a site called Jebel Faya in what is now the United Arab Emirates, just south of the entrance to the Persian Gulf. If the new tools were made by modern humans, as the researchers assert, then modern humans got out of Africa much earlier than believed.

“This is a huge milestone, but unfortunately it raises more questions than it answers,” Jeffrey Rose, an archaeologist at the University of Birmingham in England, tells the Times. The new finding ~ reported in Thursday’s issue of Science ~ points to a new level of importance of Arabia in understanding the human story.

Click here for the complete article.
Posted by Gregory LeFever at 5:22 PM