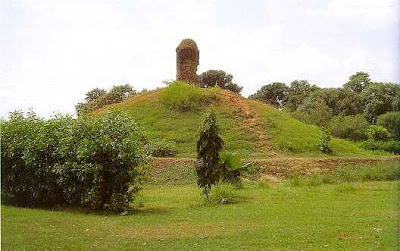 Emperor Ashoka's commemortive pillar at Lumbini.
UNESCO is coordinating an international team of archeologists in a three-year survey of the ruins of Buddha’s birthplace in Lumbini, Nepal. The project aims to identify the presence ~ or absence ~ of hidden archaeological deposits so that facilities related to pilgrimages can be located where they won’t damage valuable archaeological resources.

“This project offers a unique opportunity to investigate some of the earliest developmental phases of one of the world’s great religious traditions, and will introduce new scientific evidence into the debate surrounding the date of the Buddha’s birth,” said Robin Coningham, UNESCO Archaeological Expert and Professor of Archaeology, University of Durham.

Siddhartha Gautama, who later became Buddha, was born in 623 B.C. in the famous gardens of Lumbini. The Indian emperor Ashoka, a pilgrim to the site, erected a commemorative pillar there.
The three-year initiative is part of a larger project entitled “Strengthening the Conservation and Management of Lumbini, the Birthplace of Lord Buddha,” launched last year to address a number of issues and challenges facing the World Heritage site, including the deteriorating condition of the Marker Stone and the Ashokan Pillar, as well as inadequately mapped associated archaeological remains both within the site and in the adjacent areas.
Click here for the complete UN News Center article.
Posted by Gregory LeFever at 6:40 PM