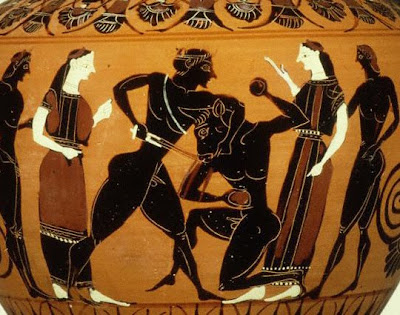 Ancient vase depiction of Theseus slaying the Minotaur.
A team of Greek and English scholars believe they have discovered a likely location for the site of the ancient Labyrinth, the legendary maze where the mythical Minotaur supposedly roamed. The elaborate network of underground tunnels is in an old stone quarry near the town of Gortyn, formerly the Roman capital of Crete.

For the last century, the town of Knossos ~ about 20 miles from Gortyn ~ has been touted as the location of the Labyrinth. According to London’s The Indepdendent:

Nicholas Howarth, an Oxford University geographer who led the expedition (to Gortyn), said there was a danger of Gortyn being lost from the story of the Labyrinth because of the overpowering position that Knossos had taken in the legend, a position fostered by Arthur Evans, a wealthy English archaeologist who excavated the site between 1900 and 1935.
"People come not just to see the controversial ruins excavated and reconstructed by Evans, but also to seek a connection to the mythical past of the Age of Heroes. It is a shame that almost all visitors to Knossos have never heard of these other possible 'sites' for the mythical Labyrinth," Mr Howarth said.

Visitors to Knossos are told the site was almost certainly the home of the legendary King Minos, who was said to have constructed the Labyrinth for the Minotaur, a monster resulting from the mating of the king’s wife with a bull.

Click here for the article in The Independent.
Posted by Gregory LeFever at 2:39 PM

Interesting angle to the well known story about the Knossos labyrinth.Or at least we tought so.Is it not exiting that Archeology has this great fact finding power and rewrites well known stories.
Besides Gortyn and Knossos on Island of Crete there is 3 cave comlex at Skotino on the Greek Mainland.One can only speculate that way way back building labyrinths was a part of religion or way of clever punishment.
As the old myth goes the Athenians killed Mino,s son.The price of peace for Athenian,s was 7 young men and 7 young virgin maidens to feed the Minotaur every 9 years.
Those numbers mach perfectly to the Minoan,s meticulous record of lunar alignment.Coincidence?? Or another grain of truth to the ancient myth well told by Homer.