Alexandria May Predate Alexander the Great 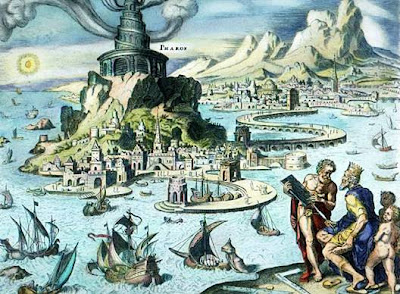 History records that the important Egyptian port city of Alexandria was first settled by Alexander the Great in 331 BC. But now, examination of sediment layers indicate the city may have existed hundreds of years earlier.

Whether the early settlement was Greek, Egyptian or affiliated with some other culture isn't known. Nor can scientists say exactly how big the settlement might have been. But the possibility of an earlier existence is supported in Homer’s "The Odyssey," which significantly predates Alexander the Great. In Book 4, Homer mentions a one-day sail from the coast near the Nile to the nearby island of Pharos, suggesting that a port settlement was already there.

... In the past few years, scientists have found fragments of ceramics and traces of lead in sediments in the area that predate Alexander's arrival by several hundred years, suggesting there was already a settlement in the area (though one far smaller than what Alexandria became).

Christopher Bernhardt of the U.S. Geological Survey and his colleagues took sediment cores (long cylindrical pieces of sediment drilled from the ground) that featured layers going as far back as nearly 8,000 years ago as part of a larger climate study of the area.

… At a mark of 3,000 years ago, Bernhardt's team detected a shift in pollen grains from native grasses and other plants to those from cereal grains, grapes and weeds associated with agriculture. They also found a marked increase in charcoal particles, all of which suggests that a settlement pre-dated the great city of Alexandria.

"At this point I don't think you can tell much about the people themselves," Bernhardt says.

Posted by Gregory LeFever at 2:11 AM