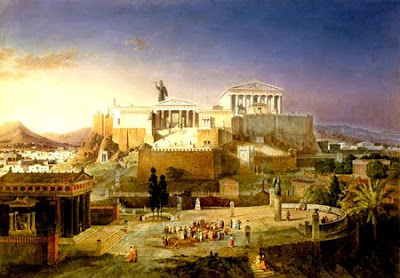 Artist's conception of Athens in its glory.
Ancient Athens imploded during the 4th century BC amid a crippling economic downtown as its army fought unpopular wars on foreign soil and immigrants surged across its borders.
Cambridge University professor Michael Scott in his new study entitled From Democrats to Kings, contends that the collapse of Greek democracy and of Athens in particular offer a stark warning from history which is often overlooked.
"In many ways this was a period of total uncertainty just like our own time," Scott told PhysOrg.com. "There are grounds to consider whether we want to go down the same route that Athens did.”
According to PhysOrg.com:

It was not the loss of its empire and defeat in war against Sparta at the end of the 5th century that heralded the death knell of Athenian democracy ~ as it is traditionally perceived. Athens' democracy in fact recovered from these injuries within years. Instead, Dr. Scott argues that the strains and stresses of the 4th century BC, which our own times seem to echo, proved too much for the Athenian democratic system and ultimately caused it to destroy itself.
"If history can provide a map of where we have been, a mirror to where we are right now and perhaps even a guide to what we should do next, the story of this period is perfectly suited to do that in our times," Dr. Scott said.

"It shows how an earlier generation of people responded to similar challenges and which strategies succeeded. It is a period of history that we would do well to think about a little more right now ~ and we ignore it at our peril."

The name of "democracy," for example, became an excuse to turn on anyone regarded as an enemy of the state. Scott's study also marks an attempt to recognize figures such as Isocrates and Phocion ~ sage political advisers who tried unsuccessfully to steer Athens away from crippling confrontations with other Greek states and Macedonia.

Click here for the PhysOrg.com article.
Posted by Gregory LeFever at 2:42 PM

There were a lot of artists who after the downfall of Athens they were creating beautiful paintings with those allusions.

Hello, i think that this post is very good, i would like to read more about it