Deforestation May Have Destroyed Mayan Culture 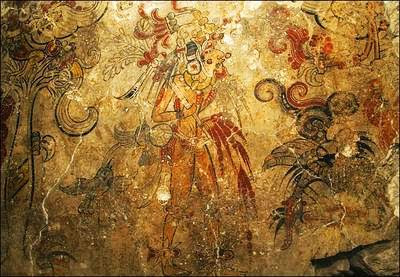 Mayan mural depicting the god of maize.
Using computer-based simulations and space-based imaging, a NASA-funded project is providing strong evidence that the once-vibrant Mayan culture destroyed itself through extreme deforestation.

"They did it to themselves," says veteran archeologist Tom Sever. According to NASA sources:

A major drought occurred about the time the Maya began to disappear. And at the time of their collapse, the Maya had cut down most of the trees across large swaths of the land to clear fields for growing corn to feed their burgeoning population. They also cut trees for firewood and for making building materials.

"They had to burn 20 trees to heat the limestone for making just 1 square meter of the lime plaster they used to build their tremendous temples, reservoirs, and monuments," explains Sever.

. . . "By interpreting infrared satellite data, we've located hundreds of old and abandoned cities not previously known to exist. The Maya used lime plaster as foundations to build their great cities filled with ornate temples, observatories, and pyramids. Over hundreds of years, the lime seeped into the soil. As a result, the vegetation around the ruins looks distinctive in infrared to this day."

Drought also made it more difficult for the Maya to store enough water to survive the dry season. "The cities tried to keep an 18-month supply of water in their reservoirs," says Sever. "For example, in Tikal there was a system of reservoirs that held millions of gallons of water. Without sufficient rain, the reservoirs ran dry."

Click here for the NASA article.
Posted by Gregory LeFever at 10:47 AM

It this really happened, don't be weird, because the human destruction have came since a long time ago, and the mayan culture could be a one more victim. Probably if we don't do anything to stop the destruction, we gonna be the next victim.