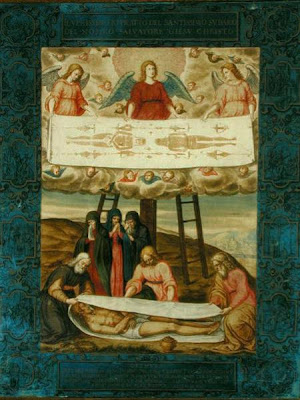 Medieval manuscript page depicting Jesus's burial with shroud.
The mysterious Shroud of Turin is back in the news this week, this time with an argument for its authenticity as the death shroud that covered Jesus from the period following his crucifixion until his resurrection.

In October, scientists pronounced the shroud as a medieval forgery after they duplicated an imprint onto linen using materials existing in the 14th Century. A 1988 carbon dating of a fragment of the cloth has dated it to the Middle Ages, when the initial forgery is claimed to have occurred.

Now, however, a Vatican scholar says she has deciphered Jesus’s “death certificate” from writing obscured on the shroud, by implication placing its origin back to the time of the resurrection.

"I think I have managed to read the burial certificate of Jesus the Nazarene, or Jesus of Nazareth," says Dr. Barbara Frale, a researcher in the Vatican secret archives. She said she reconstructed it from fragments of Greek, Hebrew and Latin writing imprinted on the cloth together with the image of the crucified man.
The letters, barely visible to the naked eye, were first spotted during an examination of the shroud in 1978, and others have since come to light.

According to the London Times:

Some scholars have suggested that the writing is from a reliquary attached to the cloth in medieval times. But Dr Frale said that the text could not have been written by a medieval Christian because it did not refer to Jesus as Christ but as "the Nazarene." This would have been "heretical" in the Middle Ages since it defined Jesus as "only a man" rather than the Son of God.

Like the image of the man himself the letters are in reverse and only make sense in negative photographs. Dr Frale told La Repubblica that under Jewish burial practices current at the time of Christ in a Roman colony such as Palestine, a body buried after a death sentence could only be returned to the family after a year in a common grave.
A death certificate was therefore glued to the burial shroud to identify it for later retrieval, and was usually stuck to the cloth around the face. This had apparently been done in the case of Jesus even though he was buried not in a common grave but in the tomb offered by Joseph of Arimathea.

Frale ~ best known for her studies of the Knights Templar ~ said she had deciphered "the death sentence on a man called Jesus the Nazarene. If that man was also Christ the Son of God it is beyond my job to establish. I did not set out to demonstrate the truth of faith.”
Click here for the London Times article.
Posted by Gregory LeFever at 1:26 PM