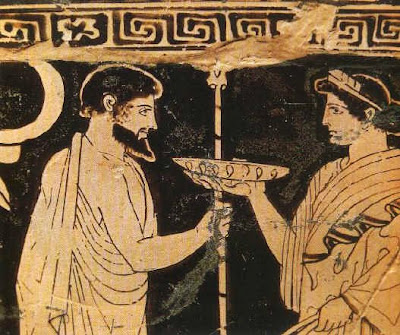 New research indicates ancient Greeks brought wine to southern France about 600 BC, dispelling the theory that the Romans were responsible for bringing viticulture to the region that became the world’s largest wine industry.

The study ~ headed by Prof. Paul Cartledge of Cambridge Univeristy ~ found that the Greeks founded Massalia, now known as Marseilles, which they then turned into a bustling trading center. Within a matter of generations the nearby Rhône became a major thoroughfare for vessels carrying terracotta amphorae containing a new exotic Greek drink made from fermented grape juice.

He said there were two main points that proved it was the Greeks who introduced wine to the region.

"First, the Greeks had to marry and mix with the local Ligurians to ensure that Massalia survived, suggesting that they also swapped goods and ideas.

"Second, they left behind copious amounts of archaeological evidence of their wine trade (unlike the Etruscans and long before the Romans), much of which has been found on Celtic sites."

Cartledge argues the new drink rapidly became a hit among the tribes of Western Europe, which then contributed to the French’s modern love of wine.
Click here for the London Telegraph article.
Posted by Gregory LeFever at 6:02 PM

That's a very nice article on French wine. For your information, Dionysus was the God of wine in Greek mythology.