Remains of Lost Army Believed to be Found 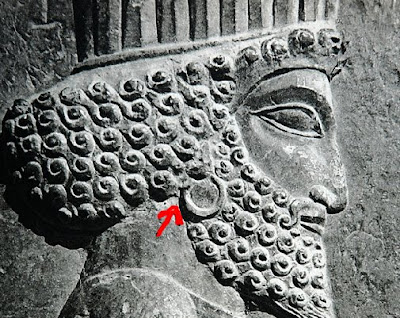 Bas-relief of a Persian soldier shows earring like one found in the Sahara.
One of archaeology’s major mysteries may have been solved with the recent discovery of the remains of a Persian army that disappeared 2,500 years ago in the sands of the Egyptian desert.

After 13 years of searching, Italian researchers have located bronze weapons, a silver bracelet, an earring and hundreds of human bones in a desolate region of the Sahara desert. They believe the remains are of the lost army of Persian King Cambyses II. The 50,000 warriors were said to be buried by a cataclysmic sandstorm in 525 B.C.

According to Discovery News:

According to Herodotus (484-425 B.C.), Cambyses, the son of Cyrus the Great, sent 50,000 soldiers from Thebes to attack the Oasis of Siwa and destroy the oracle at the Temple of Amun after the priests there refused to legitimize his claim to Egypt.

After walking for seven days in the desert, the army got to an "oasis," which historians believe was El-Kharga. After they left, they were never seen again.

"A wind arose from the south, strong and deadly, bringing with it vast columns of whirling sand, which entirely covered up the troops and caused them wholly to disappear," wrote Herodotus.

The tale of Cambyses' lost army, however, faded into antiquity. As no trace of the hapless warriors was ever found, scholars began to dismiss the story as a fanciful tale.

Now, two top Italian archaeologists claim to have found striking evidence that the Persian army was indeed swallowed in a sandstorm. Twin brothers Angelo and Alfredo Castiglioni are already famous for their discovery 20 years ago of the ancient Egyptian "city of gold" Berenike Panchrysos. 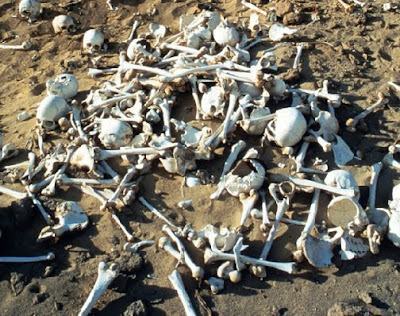 A mass grave in the sand with bones believed to belong to soldiers of the lost army.
Click here for the Discovery News article.
Click here for a 3-minute video related to the discovery.
Click here for another article, this one from the London Daily Mail.
Posted by Gregory LeFever at 6:45 PM