Ruined Ecosystem May Destroyed the Nazca 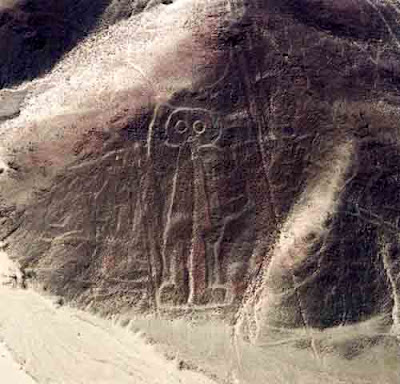 A mountainside drawing by the Nazca people on now-barren land.
Archaeologists are concluding that the Nazca ~ who once flourished in southern Peru, beginning around 200 BC ~ severely damaged their surrounding ecosystem and provoked the collapse of their own civilization around 500 AD.
Known today for creating vast patterns in the desert that can only be seen from the air, the Nazca civilization disappeared partly because it damaged the fragile ecosystem that held it in place, a study found. Author Oliver Whaley, of the Royal Botanic Gardens, Kew, said: ''The mistakes of prehistory offer us important lessons for our management of fragile, arid areas in the present.''
Recently published in the journal Latin American Antiquity, a new study found that the Nazca cleared forests to make way for their agriculture over the course of many generations.

According to the London Telegraph:

In doing so, the huarango tree, which once covered what is now a desert area, was gradually replaced by crops such as cotton and maize.
But the tree was crucial to the desert's fragile ecosystem as it enhanced soil fertility and moisture and helped to hold the Nasca's narrow, vulnerable irrigation channels in place, the researchers said.
The Nazca eventually cut down so many trees that they reached a tipping point at which the arid ecosystem was irreversibly damaged.
An El Nino-style flood then occurred, but its impact would have been far less devastating had the forests which protected the delicate desert ecology still been there, they said.

''In time, gradual woodland clearance crossed an ecological threshold - sharply defined in such desert environments - exposing the landscape to the region's extraordinary desert winds and the effects of El Nino floods,” according to Dr David Beresford-Jones of the McDonald Institute for Archaeological Research at Cambridge University

Click here for the Telegraph article.
Posted by Gregory LeFever at 5:26 PM

Interesting blog, specially this topic, I've been looking some information about Nazca culture, and this entry was very interesting and important. Thanks for share all this with us.