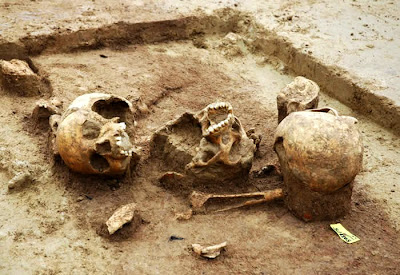 Some of the 7,000-year-old skeletal remains unearthed at Herxheim.
Archaeologists say evidence points to Neolithic cannibalism in a settlement in southern Germany some 7,000 years ago. Over a period of decades, skeletal remains indicate hundreds of people were butchered and eaten before parts of their bodies were thrown into oval pits.

Cannibalism at what is now the village of Herxheim may have occurred during ceremonies in which people from near and far brought slaves, war prisoners or other dependents for ritual sacrifice, according to Science News.
Until now, the only convincing evidence of Neolithic cannibalism came from 6,000-year-old bones in a French cave. A 1986 report concluded that the remains of various animals and at least six people were butchered and discarded there.
Herxheim offers rare evidence of cannibalism during Europe’s early Neolithic period, when farming first spread, the researchers report in the December Antiquity. Artifacts found at Herxheim come from the Linear Pottery Culture, which flourished in western and central Europe from about 7,500 to 7,000 years ago.
Click here for the Science News article.
Posted by Gregory LeFever at 9:08 AM

How interesting that we both were thinking about skeletal remains at the same time.
Click: Eternal Embrace

Kass, thanks for visiting! I went to your blogs and found them utterly intriguing. As for the coincidence regarding skeletal remains, it's a bit ghoulish, I admit. I love the title "The K is No Longer Silent." ;-)

It's incredible that some years ago people had those customs, we can see that in the past Neanderthals who always practiced that.