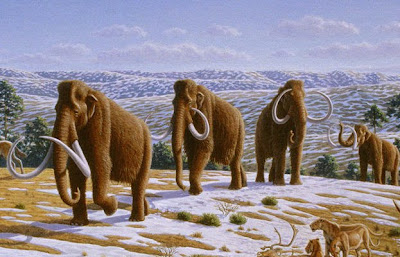 A prolonged frigid period led to extinction of mastodons and many other creatures, as well as the human Clovis culture.
While scientists are not disputing the existence of a frigid period known as the Younger Dryas about 12,900 years ago, an increasing number are now rejecting the theory that it was caused by Earth’s collision with a comet.
The frigid period ~ whatever its cause ~ is linked to extinction of sabertooths, mastodons, and other giant animals, and may have caused the decline of the Clovis culture.
The comet-collision theory was developed in 2007 and based on a combination of archaeological artifacts and extraterrestrial magnetic grains in soil samples found in a thin layer of sediment throughout North America. However new research, presented at a meeting of the Geological Society of America this week in Portland, Oregon, has taken aim at all of these findings.
Nicholas Pinter, a geologist at Southern Illinois University, argued that black mats described as charcoal in the 2007 research weren't actually charcoal, but were formed from ancient, dark soil formed in a long-ago wetland. Likewise, the small amounts of carbon "are not uniquely associated with high-intensity fire," he said.

According to National Geographic:

Vance Holliday, an archaeologist at the University of Arizona, added that there is no sign that the demise of the Clovis culture was caused by a comet crash.

Around the time of the cold snap, the style of spearpoints changed—which some scientists argued was evidence that the Clovis peoples had declined due to the comet impact. But Holliday said it reflects a normal evolution in preference. He compared spearpoint designs to the appearance—and disappearance—of tail fins on classic automobiles.

Click here for the National Geographic article.
Posted by Gregory LeFever at 6:08 PM