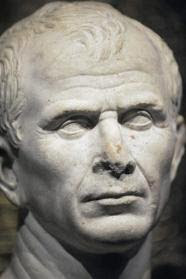 A rare bust of Julius Caesar ~ recovered in 2007 after 20 years of exploration of the Rhone riverbed in France ~ is now on public display in Arles.

The find, dated 46 BC, is all the more remarkable for likely being made during the emperor's lifetime and provides the centrepiece for the exhibition organised by Luc Long, head of the French state department for archaeological, subaquatic and deepsea research.

The unifying theme in "Caesar, the Rhone for Memory,” running to September 2010, is "to maintain the feeling of going on a journey with the archaeologists, following every stage of their work from the site of the digs right up to the restoration and exhibition of the artifacts", says its designer Pierre Berthier.

The collection shows ancient Arles was not only a port of passage, but decorated and monumental, says Long, "an ostentatious facade aiming to display Rome's wealth and power.”

Click here for the AFP article.
Posted by Gregory LeFever at 8:43 PM