Latest "Venus" Is Earliest Ever Found 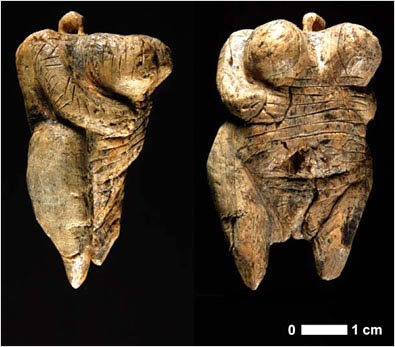 Figure is thought to be the world's oldest representation of a human.

A small ivory carving of a large-breasted woman uncovered in a German cave last September is now believed to be 35,000 years old and perhaps the oldest known example of figurative art yet found.
Now regarded as the earliest of the so-called Venus artifacts, the figurine is of the same age as some other very early artwork, including cave paintings in France and Italy. According to an article in yesterday’s New York Times:

Nicholas J. Conard, an archaeologist at the University of Tübingen, in Germany, who found the small carving in a cave last year, said it was at least 35,000 years old, “one of the oldest known examples of figurative art” in the world. It is about 5,000 years older than some other so-called Venus artifacts made by early populations of Homo sapiens in Europe.

The discovery, Dr. Conard wrote, “radically changes our view of the origins of Paleolithic art.” Before this, he noted, female imagery was unknown, most carvings and cave drawings being of mammoths, horses and other animals.

This Venus is reminiscent of the most famous of the sexually explicit Stone Age figurines, the Venus of Willendorf, discovered in Austria a century ago. That Venus is somewhat larger and dated about 24,000 years ago. Scholars speculate that Venus figurines were associated with fertility beliefs or shamanistic rituals.

Posted by Gregory LeFever at 11:04 AM