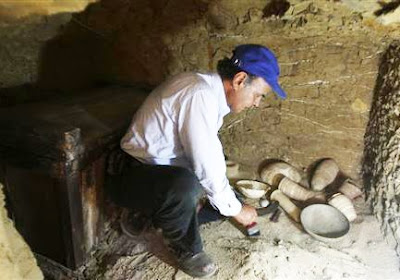 According to Reuters, the find debunks beliefs that the site dates back only to 12th dynasty pharaoh Senusret II who ruled 4,000 years ago, archaeologist Abdul Rahman Al-Ayedi said.

"The existence of this tomb is very significant because now we know that Senusret II, the builder of the pyramid, is not the founder of this site," Ayedi told Reuters in an interview. "It must have had religious significance in ancient Egypt, so that's why he chose it for his pyramid."

Inside the tiny tomb, too small for a person to stand, a box-like wood coffin contains the remains of a 40 to 49-year-old man who was likely a significant figure in the ancient Egyptian government of the time, Ayedi said. Buried in a bent position and wrapped in linens, the body was not well preserved because the tomb predates the era in which ancient Egyptians mummified their dead.

"This was a very early example of a coffin,” he said. “The body was buried flexed. The lid of the coffin was vaulted and the side of the coffin has a representation of the facade of a palace or a house."

Posted by Gregory LeFever at 7:31 PM