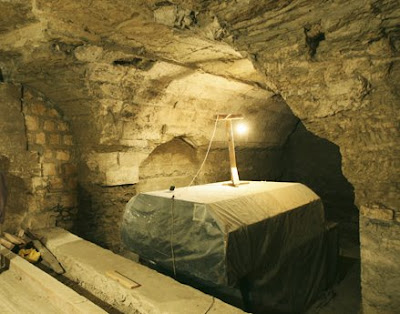 A section of the Saqqara Serapium along the uncovered ceremonial road.
Egyptian archaeologists have uncovered the base of a pharaoh’s "missing pyramid" and a ceremonial procession road where high priests carried mummified remains of sacred bulls.

The pyramid is believed to be that of King Menkauhor, an obscure pharaoh who ruled for only eight years more than 4,000 years ago. In 1842, German archaeologist Karl Richard Lepsius mentioned Menkauhor's pyramid among his finds at Saqqara, calling it the "Headless Pyramid" because its top was missing. But the desert sands covered Lepsius' discovery, and no archaeologist since was able to find it.

"We have filled the gap of the missing pyramid," Egyptian antiquities head Zahi Hawass said told reporters on a tour of the discoveries at Saqqara, the necropolis and burial site of the rulers of ancient Memphis, the capital of Egypt's Old Kingdom, south of Cairo.

Click here for the Discovery News article.
Posted by Gregory LeFever at 4:39 PM