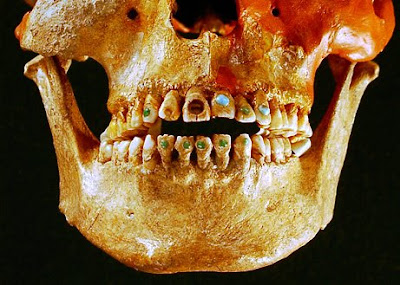 Ancient skull found in Chiapas, Mexico, displays embedded gems and notched teeth.
Sophisticated dentistry allowed Native Americans to decorate their teeth with gems, notches and grooves as far back as 2,500 years ago. The finding is based on a survey of thousands of teeth from collections in Mexico’s National Institute of Anthropology and History.
Dental decoration was popular predominantly with men. "They were not marks of social class" but instead meant for pure decoration, José Concepción Jiménez, an anthropologist at the institute, told National Geographic.

The early dentists used a drill-like device with a hard stone such as obsidian, which is capable of puncturing bone."It's possible some type of [herb based] anesthetic was applied prior to drilling to blunt any pain," Jiménez said.

The ornamental stones—including jade—were attached with an adhesive made out of natural resins, such as plant sap, which was mixed with other chemicals and crushed bones.

The dentists likely had a sophisticated knowledge of tooth anatomy. For example, they knew how to drill into teeth without hitting the pulp inside. "They didn't want to generate an infection or provoke the loss of a tooth," Jiménez said.

Click here for the National Geographic article.
Posted by Gregory LeFever at 5:22 PM