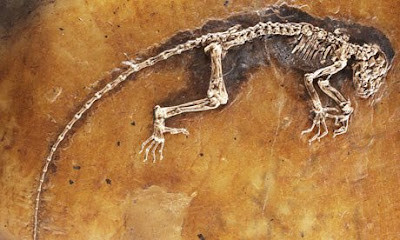 After 47 million years, the fossil named Ida remains remarkably preserved.
Scientists are proclaiming that a primate fossil nicknamed Ida is the missing evolutionary link between humans and the rest of the animal kingdom.

A top-level international research team who have studied the 47-million-year-old fossil in secret for the past two years believe she is the most complete and best preserved primate fossil ever uncovered.
According to Britain’s The Guardian:

The skeleton is 95% complete and thanks to the unique location where she died, it is possible to see individual hairs covering her body and even the make-up of her final meal – a last vegetarian snack.
"This little creature is going to show us our connection with the rest of all the mammals; with cows and sheep, and elephants and anteaters," said Sir David Attenborough, who is narrating a BBC documentary on the find. "The more you look at Ida, the more you can see, as it were, the primate in embryo."
"This will be the one pictured in the textbooks for the next hundred years," said Dr Jørn Hurum, the palaeontologist from Oslo University's Natural History Museum who assembled the scientific team to study the fossil. "It tells a part of our evolution that's been hidden so far. It's been hidden because the only [other] specimens are so incomplete and so broken there's nothing almost to study."

Ida was originally discovered by an amateur fossil hunter in the summer of 1983 at Messel pit, a world renowned fossil site near Darmstadt in Germany. He kept it under wraps for over 20 years before deciding to sell it via a German fossil dealer, who then notified Hurum in Oslo.

Click here for the article in The Guardian.
Posted by Gregory LeFever at 5:34 PM