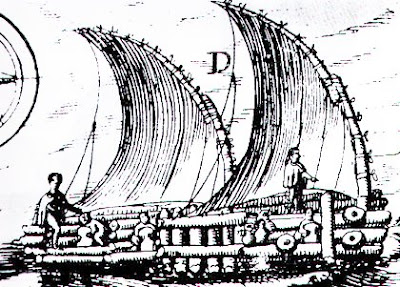 An MIT doctoral candidate and her colleagues may have solved the mystery of why a specific style of ancient metalwork appears in South America and in western Mexico, but nowhere in between. Leslie Dewan contends Ecuadorean traders a thousand years ago sailed regularly to western Mexico and back ~ a round trip of 3,800 miles ~ on sail-bearing balsa rafts.

According to Discover Magazine:

Archaeologists have long wondered why copper work and other metalwork in a style typical of ancient South America appears in western Mexico but nowhere in between the two areas. This absence suggested a sea-based trade, so Dewan’s group decided to explore whether such lengthy voyages were feasible.

They based their mathematical study of seaworthiness on 16th-century European explorers’ descriptions of Native American trading vessels in western Mexico. The explorers wrote of seeing rectangular, two-sailed vessels made of balsa, a wood native to Ecuador, tied together with a hemplike fiber. Reaching about 35 feet in length, the rafts could probably have borne up to 30 metric tons of cargo—as much as 19th-century barges did in the Erie Canal.

Dewan’s team also evaluated the role of wind and water currents, concluding that the traders may have spent a few months in Mexico and returned when currents shifted. Meanwhile, her team is preparing to construct an actual-size model for the trip from Ecuador to Mexico, as they theorize it was done 1,300 years ago.

Posted by Gregory LeFever at 2:52 PM