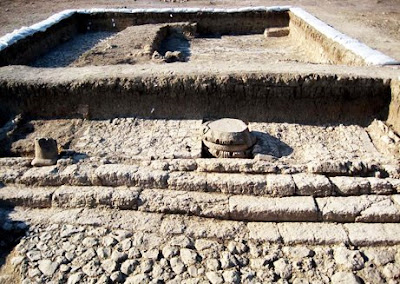 Remains of the Tayinat temple in southeastern Turkey.

Stone slabs engraved with a dead language and found in an ancient temple in Turkey continue to shed light on the eastern European “dark age” from 1200 to 900 BC, according to a new article in National Geographic.

The Biblical Old Testament, Greek Homeric epics, and texts from Ramses III describe the transition from the Bronze Age to the Iron Age as a period of cultural collapse, famine and violence.

But the temple ruins suggest otherwise.

"We're beginning to find new archaeological evidence that there was a continuation of writing traditions, as well as cultural and political continuity from the Bronze Age into this Iron Age period," according to Timothy Harrison of the University of Toronto's Tayinat Archaeological Project . "We are filling in a cultural and a political history of this era."

Harrison and colleagues found the temple in 2008 at the Tell Ta'yinat site, an archaeological settlement on the Plain of Antioch in southeastern Turkey. It appears to have been built during the time of King Solomon, between the 10th and 9th centuries BC. It was likely destroyed with the rest of Tell Ta'yinat during the 8th century BC.

Posted by Gregory LeFever at 8:48 PM

Again, there was no "King Solomon" proven in any archaeological sense. None. And it is dogmatic gibberish to continue this charade.

In the strict sense, you're right. But it sort of reminds me of the "innocent until proven guilty" foundation of the American legal system. Since Solomon is a figure in the Old Testament, he is allowed to "exist" until there is proof that he didn't. I'm not saying this is correct archaeological thinking, but that sort of thinking runs all through religious beliefs of many cultures, as you know probably better than I do.