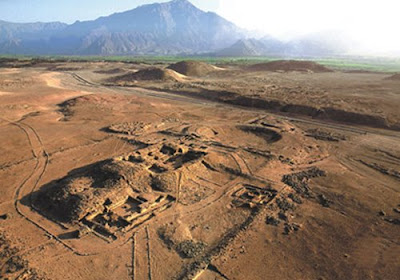 The main pyramid  in the ruins of Caral, Peru, 120 miles north of Lima. 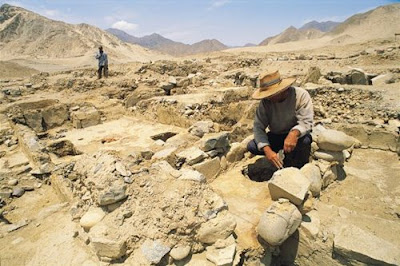 Peruvian archaeologists exploring the oldest city in the Americas.

The earliest civilization in the Americas ~ a sizeable society capable of building large pre-Mayan structures along the Peruvian coast ~ likely was destroyed nearly 4,000 years ago by earthquakes and torrential rains, followed by a deadly march of sand across fertile fields.

"This maritime farming community had been successful for over 2,000 years, they had no incentive to change, and then all of a sudden, 'boom,'" said Mike Moseley, a distinguished professor of anthropology at the University of Florida. "They just got the props knocked out from under them."

According to information released by the University of Florida, the people of the Supe Valley along the central Peruvian coast did not use pottery or weave cloth in the settlements they founded as far back as 5,800 years ago. But they flourished in the arid desert plain adjacent to productive bays and estuaries.

Most impressively, the Supe built extremely large, elaborate, stone pyramid temples -- thousands of years before the better-known pyramids crafted by the Maya. The largest so far excavated, the Pirámide Mayor at inland settlement Caral, measured more than 550 feet long, nearly 500 feet wide and rose in a series of steps nearly 100 feet high.

The Supe seemed to thrive in the valley for about 2,000 years. But around 3,600 years ago, an enormous earthquake ~ Moseley estimates its magnitude at 8 or higher ~ struck Caral and a nearby coastal settlement, Aspero.

The earthquake destabilized the barren mountain ranges surrounding the valley, sending massive amounts of debris crashing into the foothills. Subsequent El Niños brought huge rains, washing the debris into the ocean. There, a strong current flowing parallel to the shore re-deposited the sand and silt in the form of a large ridge known today as the Medio Mundo. The ridge sealed off the formerly rich coastal bays, which rapidly filled with sand.

Strong ever-present onshore winds resulted in "massive sand sheets that blew inland on the constant, strong, onshore breeze and swamped the irrigation systems and agricultural fields," the paper says. Not only that, but the windblown sand had a blasting effect that would have made daily life all but impossible, Moseley said.

The bottom line: What had for centuries been a productive, if arid, region became all but uninhabitable in the span of just a handful of generations. The Supe society withered and eventually collapsed, replaced only gradually later on -- by societies that relied on the much more modern arts of pottery and weaving, Moseley said.

With much of the world's population centers built in environmentally vulnerable areas, the Supe's demise may hold a cautionary tale for modern times, the researchers said. El Niño events, in particular, may become more common as global climate change continues.

"These are processes that continue into the present," said Dan Sandweiss, the paper's lead author and an anthropology professor and graduate dean at the University of Maine.

Click here for the complete University of Florida article. 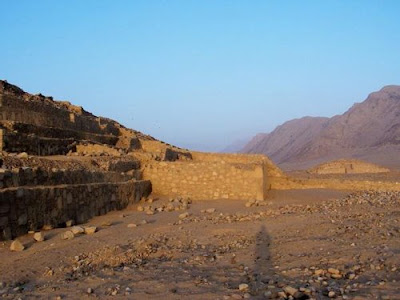 More traces of the earliest civilization in the Americas.

Posted by Gregory LeFever at 12:03 PM