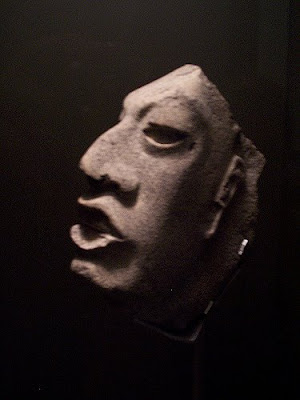 Some might think our culture goes to unacceptable lengths in enforcing society’s standards for beauty, but we’ve got nothing over on the ancient Mayans, who reshaped their children’s skulls and inlayed their own teeth with jade.

“The Maya went to extreme lengths to transform their bodies,” Professor Mary Miller reports in the new issue of Archaeology magazine. “They invested vast wealth and endured unspeakable pain to make themselves beautiful.”

As an example, Miller cites K’inich Janaab’ Pakal, who ruled the western Maya city of Palenque from 615 to 683, and after his death at the age of 80. His skeleton shows that soon after his birth, his head was strapped between two cradle-boards to compress it from back to front. This left an indentation above his brow, which was emphasized by an artificial nasal bridge, probably of clay or plaster, built up on to his forehead.

Pakal’s front teeth were filed into an inverted T-shape, marking him as also being the Sun God, something shown on his jade burial mask as well. For many Maya, notably those of the elite, dental decoration was seen as highly desirable. Teeth, especially the upper incisors and canines were filed and notched in a variety of designs, giving in some cases a distinctly crooked smile.

Most striking, however, were the dental inlays: a shallow hole was drilled into the front face of the tooth enamel (using a reed or bone hollow drill and an abrasive such as sand or jade dust), sometimes reaching the dentine within. Small discs of jade, obsidian or haematite were then cemented into the holes: the plant adhesive was so powerful that many burials found by archaeologists today still have the inlays firmly in place. Up to three discs were inserted into a single tooth, and jade and the other materials were combined to give a flash of apple-green, dull red and shiny black across the mouth; inlays and filing were also combined.

The Maya also painted their bodies, in life and in death. Narrative scenes on polychrome vases show pigments applied to face, chest and buttocks. In death, Pakal’s corpse was treated with alternating layers of red and black pigments, Miller reports. Red to the Maya was the color of the sunrise, black of the sunset, alternating with each other in the diurnal cycle, according to the Times article.

Posted by Gregory LeFever at 7:07 PM