First Americans Arrived by Both Land and Sea 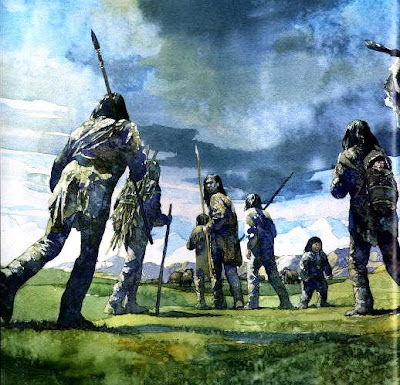 Artist's conception of the trek from Beringia some 15,000 years ago.
Did the first Americans arrive here by following a coastal route from their homelands in Asia and Alaska, or did they travel inland? A new study concludes that they did both, according to today’s edition of Current Biology.

The original colonizers of North and South America came from eastern Asia and migrated to the Americas after spending some time ~ perhaps several thousand years ~ in a region called Beringia, which included parts of Siberia and Alaska and the land bridge that once connected them.

Recent archaeological and genetic evidence has convinced most researchers that the colonists had already arrived in the Americas at least 15,000 years ago. But scientists have long debated what routes they took. The traditional view is that they tramped through an "ice-free corridor" that opened up in modern-day Canada at the end of the last Ice Age. More recently, however, some archaeologists and geneticists have argued that the first Americans marched as far south as Chile along the Pacific coast, which was also free of ice at the time.

A team studying genomes has found evidence of two migratory waves out of Beringia at about the same time, one that took the coastal route to South America and one that traveled the ice-free corridor to the Great Lakes and Great Plains. Evidence also suggests that the two groups, which must have been genetically separate even though they both inhabited Beringia at about the same time, spoke different languages.

Posted by Gregory LeFever at 11:41 AM