Nazca Beheaded Own Brethren for Trophies 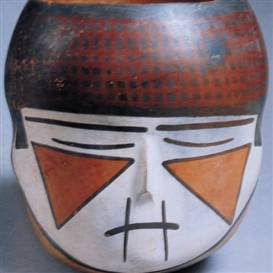 The South American people who carved the Nazca Lines across the Peruvian desert some 2,000 years ago also were great collectors of human heads, according to Discovery News.

The Nazca civilization ~ flourishing in Peru between the first century BC and the fifth century AD and sliding into oblivion by the time the Inca Empire rose to dominate the Andes ~ is mostly known for carving in the desert hundreds of geometric lines and images of animals and birds that can only be viewed from the air.

They also boasted the largest collection of human heads in the Andes region of South America. Carefully prepared, the lips sewed with long cactus spines, all heads featured a hole in the center of the forehead so that a carrying rope could be inserted. Hanged and suspended from these woven cords, the heads were long believed to be war trophies.

Heads Came from Own People

But recent analysis of the diet-related substances found in the teeth of some heads unearthed in 1925, reveals that the Nazca built their collection not from foreign enemies slain in battles, but from their own people.

"Nazca pottery gives us very interesting information about the role of trophy heads, both in the hands of warriors and also in ritual activities, such as burials and ritual caches. We can use sophisticated laboratory techniques to answer very interesting questions about the past, even when the excavations took place almost 100 years ago," archaeologist Kelly Knudson of Arizona State University in Tempe, told Discovery News. 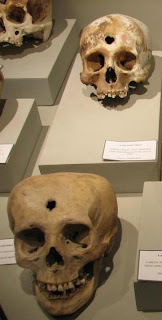 Published in the Journal of Anthropological Archaeology, the study examined 16 trophy heads of the Kroeber collection at Chicago's Field Museum of Natural History and 13 mummified bodies buried in the Nazca region. Knudson and colleagues compared tooth enamel from the trophy heads with the mummified bodies.

Teeth from the trophy heads and from the mummified bodies showed no substantial differences in the ratios of several chemical substances, showing that the trophy heads came from the Nazca themselves rather than from outsiders.

"Our data do not support the hypothesis that Nazca trophy heads were taken from enemy warriors from foreign locales. We argue that transforming local Nazca individuals into trophy heads highlights their ritual role," the researchers concluded.

Posted by Gregory LeFever at 1:05 PM