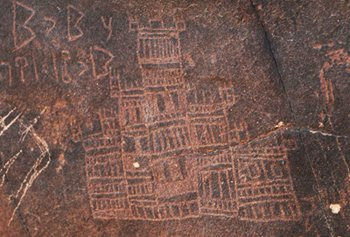 A castle-shaped inscription recently discovered in Raima Homed, Yemen, is the first of its kid, according to a team from the General Organization for Antiquities and Museums (GOAM). That’s because of the clearness of the shape of the castle, the pre-Islamic handwriting ( Musnad), and the pictures of animals found behind it.

The inscription was carved into a large rock in a mountain in front of the area where a team from the Department of Antiquities last week found the ancient monument in Hesn Ja’ar in Raima. The team is now expected to cover the area to determine its importance and historical value of the new findings.
Posted by Gregory LeFever at 8:03 AM