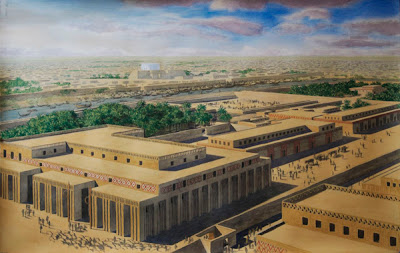 Artist's conception of the ancient city of Uruk.


An American research team believes ancient Mesopotamian cities such as Uruk and Ur were not necessarily located on the banks of the region’s main rivers, but instead thrived in the lowland marshes fed by the rivers.
“Clearly, the earliest cities were not strung out along rivers like pearls on a strand,” says Dr. Jennifer Pournelle of the University of South Carolina. “Rather, they were spread across the river delta within and along the margins of marshlands.”
Pournelle last fall led the first American archaeological research team to visit Iraq in 25 years. Her group combines excavation records and archaeological site maps with aerial and satellite imagery in order to reconstruct ancient environments. They explored the lowlands of the Tigris-Euphrates river system in southern Iraq.
Most of the previous archaeological data in Iraq was collected from 1900 through the 1950s, when little attention was paid to plants and animals, she said. The environmental contexts for museum objects and architecture were largely undocumented. When recorded at all, they emphasized grain agriculture and domesticated livestock.
Click here for the complete article.
Posted by Gregory LeFever at 8:07 PM