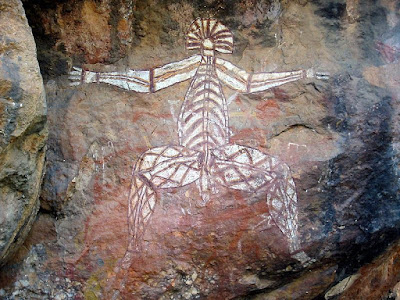 Ancient Aboriginal cave drawing.
Aboriginal dreamtime stories were linking meteorites to the origins of life thousands of years before modern science reached the same conclusion.
Duane Hamacher of Macquarie University in Sydney, Australia, says the Arrernte and Luritja people of central Australia have an unusually strong focus on meteors, meteorites and impact craters and knew about the nightly and yearly movements of stars. Many of their folk tales and legends feature meteorites as origins of life.
According to Hamacher, one story spoke of life coming from two rocks that fell out of the sky. "These rocks were people described as stars falling to the ground; they were like Adam and Eve," he says. "Another described how the egg of life was accidently dropped from the sky, falling to the ground and breaking into pieces, bringing life to the Earth."
Hamacher says science has recently confirmed that amino acids ~ the basic building blocks of life ~ are transported to earth by comets and meteors.
Click here for the ABC Science article.
Posted by Gregory LeFever at 11:34 AM