Ancient Israelites Worshipped Both God and His Wife 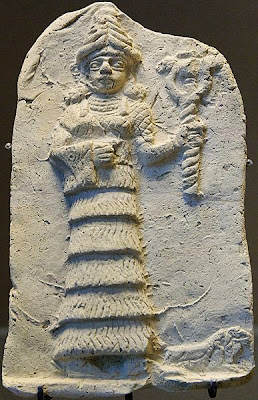 Asherah, or Ishtar, on 2nd millennium BC terracotta relief.


Findings that the ancient Israelites worshipped Asherah ~ the wife of Yahweh, the Israelites’ god ~ is gaining new prominence among biblical scholars. Accounts of Yahweh and Asherah are in the Old Testament’s Book of Kings.
The first historian to mention that the ancient Israelites worshiped both Yahweh and Asherah was Raphael Patai in 1967. The theory has gained new prominence due to the research of Francesca Stavrakopoulou, who began her work at Oxford and is now a senior lecturer in the department of Theology and Religion at the University of Exeter.
According to Discovery News:

"You might know him as Yahweh, Allah or God. But on this fact, Jews, Muslims and Christians, the people of the great Abrahamic religions, are agreed: There is only one of Him," writes Stavrakopoulou in a statement released to the British media. "He is a solitary figure, a single, universal creator, not one God among many ... or so we like to believe."

"After years of research specializing in the history and religion of Israel, however, I have come to a colorful and what could seem, to some, uncomfortable conclusion that God had a wife," she added.

Stavrakopoulou bases her theory on ancient texts, amulets and figurines unearthed primarily in the ancient Canaanite coastal city called Ugarit, now modern-day Syria. All of these artifacts reveal that Asherah was a powerful fertility goddess.
Asherah's connection to Yahweh, according to Stavrakopoulou, is spelled out in both the Bible and an 8th century B.C. inscription on pottery found in the Sinai desert at a site called Kuntillet Ajrud.
J. Edward Wright, president of both The Arizona Center for Judaic Studies and The Albright Institute for Archaeological Research, told Discovery News that he agrees several Hebrew inscriptions mention "Yahweh and his Asherah."

"Asherah was not entirely edited out of the Bible by its male editors," he added. "Traces of her remain, and based on those traces, archaeological evidence and references to her in texts from nations bordering Israel and Judah, we can reconstruct her role in the religions of the Southern Levant."

Asherah ~ known across the ancient Near East by various other names, such as Astarte and Istar ~ was "an important deity, one who was both mighty and nurturing," Wright continued.
Click here for the complete article.
Posted by Gregory LeFever at 11:59 AM

I like it. This troubles me not at all. God has evolved. The traces ought to remain and of course globally they do.

That is the job of Hinduism, to take all the traces and make them contemporary. The educated among them understand the sacred play of it all, that in the end one arrives in a unity so all encompassing as to be unthinkable. That's why there is need for many gods - to permit god as thinkable to be in human life.

This is a bunch of bunk where are these inscriptions that says Yahweh and his wife !the original artifact didn’t even exist no more you people will believe anything