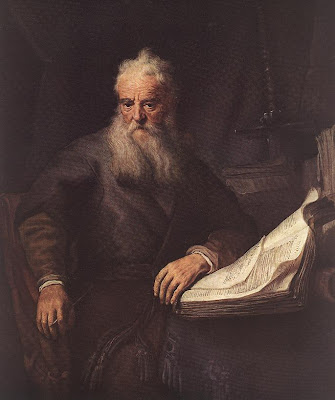 Rembrandt's "Paul." Not such a misogynist after all?
The words “lie” and “Bible” aren’t often linked, but a leading biblical historian points out that the level of deception in the scriptures is much greater than most people think ~ especially regarding issues of authorship.
Bart Ehrman, the James A. Gray Distinguished Professor of Religious Studies at the University of North Carolina, says that the New Testament book of 2 Peter was not written by the apostle Peter, and that Paul wrote only seven of the 13 letters ascribed to him.
Regarding the impact of such fakery, Ehrman writes:

This may all seem like a bit of antiquarian curiosity, especially for people whose lives don't depend on the Bible or even people of faith for whom biblical matters are a peripheral interest at best. But in fact, it matters sometimes. Whoever wrote the book of 1 Timothy claimed to be Paul. But he was lying about that -- he was someone else living after Paul had died. In his book, the author of 1 Timothy used Paul's name and authority to address a problem that he saw in the church. Women were speaking out, exercising authority and teaching men. That had to stop. The author told women to be silent and submissive, and reminded his readers about what happened the first time a woman was allowed to exercise authority over a man, in that little incident in the garden of Eden. No, the author argued, if women wanted to be saved, they were to have babies (1 Tim. 2:11-15).

Largely on the basis of this passage, the apostle Paul has been branded, by more liberation minded people of recent generations, as one of history's great misogynists. The problem, of course, is that Paul never said any such thing. And why does it matter? Because the passage is still used by church leaders today to oppress and silence women. Why are there no women priests in the Catholic Church? Why are women not allowed to preach in conservative evangelical churches? Why are there churches today that do not allow women even to speak? In no small measure it is because Paul allegedly taught that women had to be silent, submissive and pregnant. Except that the person who taught this was not Paul, but someone lying about his identity so that his readers would think he was Paul.

Ehrman is author of bestsellers including Misquoting Jesus and Jesus, Interrupted. His latest is Forged: Writing in the Name of God ~ Why the Bible’s Authors Are Not Who We Think They Are.
Click here for the complete article.
Posted by Gregory LeFever at 5:38 PM