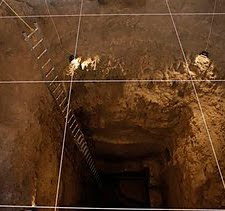 A long-sealed tunnel ~ believed to date back 1,800 years ~ has been found under the ruins of Teotihuacan and containing chambers that may hold tombs of the ancient city's early rulers. According to ABC News:

Experts say a tomb discovery would be significant because the social structure of Teotihuacan remains a mystery after nearly 100 years of archaeological exploration at the site, which is best known for the towering Pyramids of the Moon and the Sun. No depiction of a ruler, or the tomb of a monarch, has ever been found, setting the metropolis apart from other pre-Hispanic cultures that deified their rulers.

Archaeologists had suspected the hidden tunnel’s existence following a heavy rainstorm in 2003 caused the ground to sink at the foot of the Temple of Quetzacoatl, in the central ceremonial area of the ruins just north of Mexico City.


Click here for the article.
Posted by Gregory LeFever at 9:34 AM