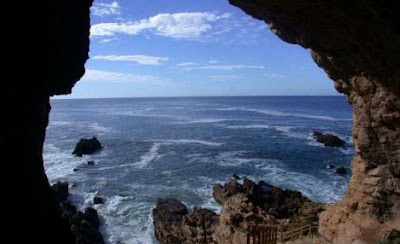 Mouth of African cave that may have sheltered Ice Age humans.
A devastating ice age nearly 200,000 years ago may have reduced the world’s human population to a few hundred people who survived in caves in southernmost Africa before eventually migrating to other parts of the globe as the climate became more hospitable.
A growing number of scientists believe this scenario accounts for humans’ limited genetic diversity compared to other species. According to the Mail Online:

“Shortly after Homo sapiens first evolved, the harsh climate conditions nearly extinguished our species,” says Professor Curtis Marean of the Institute of Human Origins at Arizona State University. “Recent finds suggest the small population that gave rise to all humans alive today survived by exploiting a unique combination of resources along the southern coast of Africa.”

Marean has discovered ancient human artifacts in isolated caves ~ containing archaeological remains going back at least 164,000 years ~ in an area known as Pinnacle Point in South Africa. Humans would have been able to survive there because of rich vegetation available in the area, plus the sea would have been a good source of food as currents carrying nutrients would have passed by the shore, bringing with them a plentiful supply of fish.
Many researchers believe that modern humans evolved about 195,000 years ago in East Africa, and within 50,000 years had spread to other parts of the continent. It is thought that 70,000 years ago a dry period caused Red Sea levels to fall and the gap across its mouth to shrink from 18 miles to eight miles, enabling migration to Arabia.
Click here for the complete article.
Posted by Gregory LeFever at 5:37 AM