Graffiti in Pompeii Was Respected and Plentiful 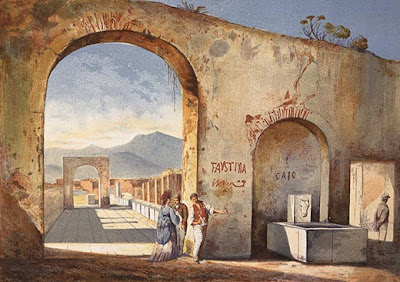 Graffiti was plentiful on the walls of Pompeii.
The people of Pompeii used graffiti ~ a respected for of writing in the ancient Roman world ~ to express goodwill.
“They were much nicer in their graffiti than we are,” says Rebecca Benefiel, a classicist from Washington & Lee University who has spent six summers studying the doomed city’s graffiti. “There are lots of pairings with the word ‘felicter,’ which means ‘happily.’ When you pair it with someone’s name, it means you’re hoping things go well for that person. There are lots of graffiti that say ‘Felicter Pompeii,’ wishing the whole town well.”
According to Smithsonian.com:

From the very beginning, archaeologists noticed copious amounts of graffiti on the outsides of (Pompeii’s) buildings. In the late 1800s, scholars began making careful copies of Latin inscriptions throughout the ancient Roman world, including Pompeii, and cataloging them. This effort is a boon to scholars like Benefiel, since more than 90 percent of Pompeii’s recorded graffiti have since been erased by exposure to the elements.

Based on the graffiti found on both exterior walls and in kitchens and servant rooms, Benefiel surmises that the emperor Nero was much more popular than we tend to think. She’s also found that declarations of love were common, and that the people of Pompeii displayed their cleverness via graffiti, from poetry contests to playful combinations of the letters that form Roman numerals.
Click here for the Smithsonian.com article.
Posted by Gregory LeFever at 6:04 PM