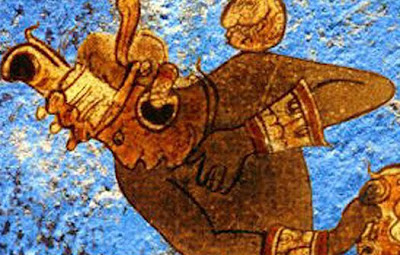 Warrior with Azul Maya background, the basis for new long-lasting dyes.
To create a new dye intended to last a thousand years, physicists are basing their formula on a pigment that already has lasted that long ~ the brilliant blue the ancient Mayans used on their temple walls.
“This pigment has been stable for centuries in the hostile conditions of the jungle,” Eric Dooryhee of the Brookhaven National Laboratory in Upton, N.Y., told Fox News. “We're trying to mimic it to make new materials.”

Unlike most organic pigments, which tend to break down over time, the pigment Maya Blue is remarkably resistant -- not only to natural weathering, heat, and light, but also to strong acids and solvents in the laboratory.

Pre-Columbian Mesoamericans, who lived in Central America before the first Spaniards arrived, developed the pigment about 1700 years ago. Archaeologists rediscovered it in 1931 at the site of the ancient Mayan capitol Chichen Itza.

Mayans made the pigment by mixing indigo plants and a type of clay called palygorskite. A bowl retrieved from the Sacred Cenote revealed traces of all of these materials, each of which was considered to be a healing substance by the Mayans.
After examining clay-like materials with similar structures, Dooryhee and his colleagues successfully combined indigo with zeolite ~ used in products as diverse as cement, laundry soaps, nutritional supplements, and cat litter ~ to make a new kind of long-lasting blue pigment.
Click here for the complete article.
Click here for earlier article on Mayan blue.
Posted by Gregory LeFever at 6:28 PM