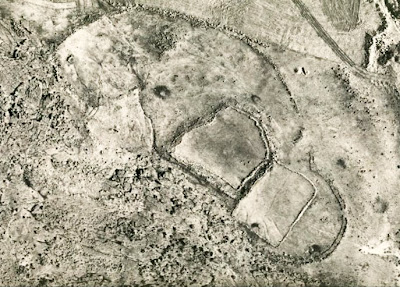 One of the sites with a foot-shaped enclosure in the Jordan Valley.

Five archaeological sites surrounded by foot-shaped enclosures are now believed to be among the earliest sites built in Israel, with the odd foot-shaped layout symbolizing ownership of the land.

"The 'foot' structures that we found in the Jordan valley are the first sites that the People of Israel built upon entering Canaan and they testify to the biblical concept of ownership of the land with the foot," said archaeologist Prof. Adam Zertal of the University of Haifa, who headed the excavating team that exposed five compounds in the shape of an enormous foot.

The sites are believed to date back to the Iron Age I, around the 13th century BC. Based on their size and shape, it appears they were used for human assembly and not for animals.

Zertal told ScienceDaily that the "foot" held much significance as a symbol of ownership of territory, control over an enemy, connection between people and land, and presence of a deity. Some of these concepts are mentioned in ancient Egyptian literature. The Bible also has a wealth of references to the importance of the "foot" as a symbol of ownership, the link between people and their deity, defeating the enemy 'underfoot', and the temple imaged as a foot.

Posted by Gregory LeFever at 11:25 AM

Nonsense. There were no "people of Israel" in the 13th century B.C.

I'm sure you could battle it out with the Israeli scholars cited in the article, on both counts. What perplexed me about the article was that the shape of the so-called "foot enclosure" is only visible from a substantial altitude ... not unlike Peru's Nazca Lines. I tend to question whether the "foot" shape was even remotely related to beliefs of the "people of Israel" or maybe simply reflecting an enclosure built to conform to the quirks of the topography.