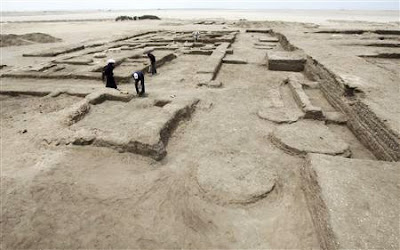 A view of a newly discovered ancient fortification at Tell Heboua.
Archaeologists are hoping the discovery of a 3,500-year-old military garrison of mud-brick and seashells in Egypt's Sinai desert may be key to defining pharaonic-era defenses at the northeast gateway to ancient Egypt. They say inscriptions at Luxor's Karnak temple may serve as a guide to finding other outposts.

Determining the location of the garrison at the ancient city of Tharu is key to understanding where to start looking.

"As we understand from the inscription at Karnak temple, the city of Tharu had two fortifications with the Nile in the middle," Mohamad Abdul Maqsoud, who heads archaeological exploration in Egypt's Nile Delta and Sinai regions, told Reuters. "This city was used to protect Egypt and as a gate to the Delta. It was a post of control. If you wanted to cross the Nile, you asked for permission before you crossed the bridge.”

Most Egyptian fortifications at the time were made of stone, not easily available in the Sinai. So Egyptians used seashells to strengthen the mud brick used to build the garrison, with a 15-meter thick and 12-meter high wall to discourage attack.

Click here for the Reuters article.
Posted by Gregory LeFever at 7:11 PM