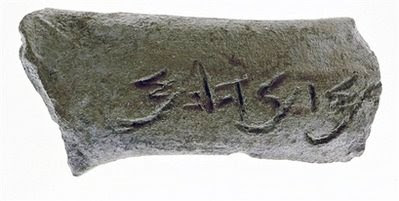 A section of the jar handle with its ancient inscription.
Archaeologists have uncovered a nearly 3,000-year-old jar handle bearing ancient Hebrew script. It was found on Jerusalem's Mount of Olives and is significantly older than most inscribed artifacts unearthed in the ancient city.

The Iron Age handle is inscribed with the Hebrew name Menachem, the name of an Israelite king, as well as a partly intact letter, the Hebrew character "lamed," meaning "to." That suggests the jar was a gift to someone named Menachem, said Ron Beeri, who directed the excavation for the Israel Antiquities Authority.

"It's important because it shows that they actually used the name Menachem during that period," Beeri said. "It's not just from the Bible, but it's also in the archaeological record."

Based on the style of the inscription, he dated the handle to around 900 B.C., the time of the first Jewish Temple in Jerusalem as recounted in the Bible. The vessel the handle was attached to did not survive, so it is impossible to tell what it was used for. Similar vessels were known to have held products like oil or wheat.

Click here for the Associated Press article.
Posted by Gregory LeFever at 3:02 PM