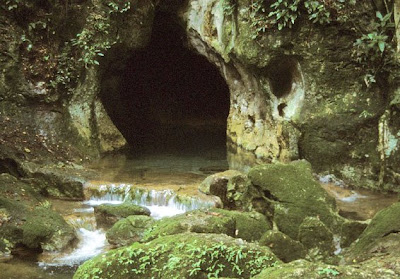 Opening to Actun Tunichil Muknal, an entrance to the Mayan underworld.
Xibalba was a Maya name for the underworld, home of the gods of death and disease. Caves, not the lofty pyramids left behind by the ancient Maya, were the entrances to Xibalba. And here, in caves like Actun Tunichil Muknal in Belize, they left sacrifices ~ plates, bowls and captive's remains ~ as offerings to the gods.
For more than four millennia, Maya conducted rituals in caves like Actun Tunichil Muknal, where archaeologist Jaime Awe, director of Belize's Institute of Archaeology, led teams to explore starting in 1993. The Maya abandoned their pyramid-adorned ceremonial centers by 1050 A.D. In a recent paper in the Latin American Antiquity Journal, Awe and colleagues presented evidence from caves like this one that drought played a role in the famed collapse of the ancient Maya.
They compared charcoal dates left by torches to large jars left behind to find that more elaborate gifts were left at the most intense periods without rain, evidence of a "drought cult," Awe says. "They were asking for more water from caves seen as a water source and home of the gods."
When things got really tough, human sacrifices turn up in caves like Actun Tunichil Muknal, best known for its "Crystal Maiden" skeleton ~ a woman sacrificed here and left behind, her bones glistening with the limestone that cements her and many other sacrifices to the floor. "They were likely war captives, captured and brought here to be killed on the spot," Awe tells USA Today. "When things get hard, people take more extreme steps," he proposes.
“We are not arguing that drought was the sole reason for the Maya 'collapse'," Awe says. He argues the ancient Maya culture was "already broken" by deforestation and related excesses when the lack of water piled more weight on the society of the time. "It was a straw piled on the camel's back."

Click here for the complete article in USA Today.

Posted by Gregory LeFever at 6:48 PM