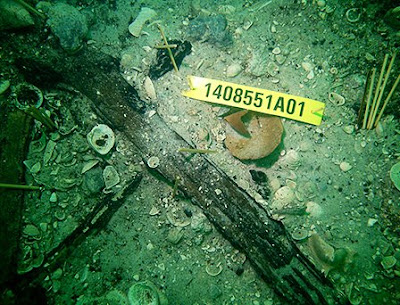 Marker on sinkhole floor indicates a gourd used as an ancient canteen.

A 30-foot-deep sinkhole in southern Florida continues to yield artifacts now indicating the site ~ some 12,000 years ago, when it was dry land ~ may have been an ancient butcher shop.

"This is a warehouse of environmental, natural, historical, and archaeological remains in a very, very well preserved environment," Roger Smith, Florida's state underwater archaeologist, told National Geographic. "That's why it's a world-class site. I would call it a portal back into time."

Archaeologists have been recovering primitive relics from the spring ~ called Little Salt Spring ~ since 1977, when divers found the remains of a large, now extinct tortoise and a sharpened stake that may have been used by a hungry hunter to kill the animal 12,000 years ago. They found more from the tortoise this past July, along with the slaughtered remains of a giant ground sloth.

The discovery of the sloth's bones could indicate that Little Salt Spring was a sort of ancient butcher shop where hunters often killed and their prey and prepared meat when this was dry land. These remains come from the earliest known period of human activity in the Western Hemisphere.

Aerial view of sinkhole, about 12 miles south of Sarasota, Florida.
Click here for the complete National Geographic article.
Click here for a video about Ice Age people in Florida.

Posted by Gregory LeFever at 12:29 PM