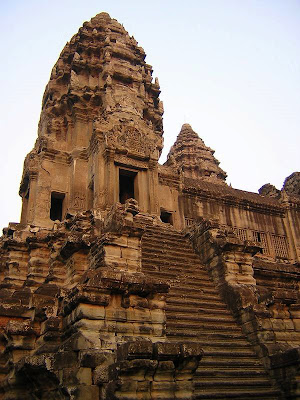 The collapse of Cambodia's great ancient city of Angkor may have been due to a massive drought nearly 600 years ago and not rival Siamese forces and widespread deforestation as previously suspected. Bands from tree rings show that Southeast Asia was hit by a severe and prolonged drought from 1415 until 1439, coinciding with the period during which many archeologists believe Angkor collapsed.

From the city of famed temples, Angkorian kings ruled over most of Southeast Asia between the 9th and 14th centuries. They oversaw construction of architectural stone marvels, including Angkor Wat, regarded as a wonder of religious architecture and designated a World Heritage Site by the United Nations.

Until now, the 1431 invasion from Siam — what is now Thailand — has long been regarded as a main cause of Angkor's fall.

"Given all the stress the Khmer civilization was under due to political reasons and so forth, a drought of the magnitude we see in our records should have played a significant role in causing its demise," said Brendan Buckley, a research scientist at Columbia University's Tree-Ring Laboratory and one of the world's top tree ring experts.

Posted by Gregory LeFever at 6:14 PM