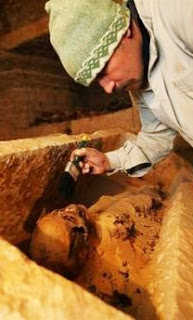 Egyptian archaeologists have found more than 20 mummies in a burial chamber dating back at least 2,600 years. Eight wooden and stone sarcophagi were also discovered during the excavations at the Saqqara site, said Zahi Hawass, Egypt's chief archaeologist.

One limestone sarcophagus sealed with plaster is thought to be more than 4,000 years old, according to the BBC.

The mummies ~ 22 of which were found in niches along a wall ~ were in a tomb dating to 640BC, Hawass said. One wooden sarcophagus had not been opened since ancient times, though one official said ancient grave robbers had probably reached it first, according to a government statement.

A mummy was found in the only sarcophagus to have been opened so far, and archaeologists said they were expecting to find more mummies in the others.

At right, a worker cleans the face of the recently discovered mummy.

Click here for the BBC article and a video.

Posted by Gregory LeFever at 6:50 PM