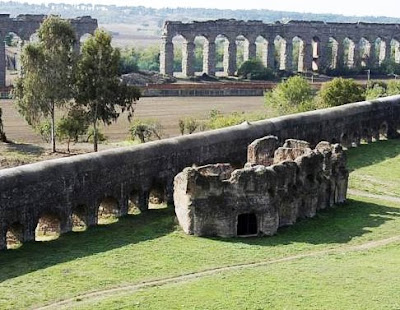 Excavations began in earnest only about two years ago, revealing a residence attached to an elaborate thermal bath complex dating to the first century A.D. complete with hot baths, large tubs and a communal latrine. Since then, archeologists said they had also uncovered prized artifacts including fragments of columns, floor slabs and the head of a marble statue believed to represent either the Greek divinity of Zeus Serapide or Asclepius, the god of medicine and healing.

"It's very unusual to find such well-preserved remains in Rome because most of the sites have usually been plundered already and the artifacts stolen," Dora Cirone, an archeologist on the dig, told reporters last week. "Luckily, much of the remains here were found buried below floor level, and no one had laid their hands on it."

The complex initially belonged to Quintus Servilius Pudens, a wealthy friend of Emperor Hadrian, who probably held private parties in the baths for his friends, archeologists said.