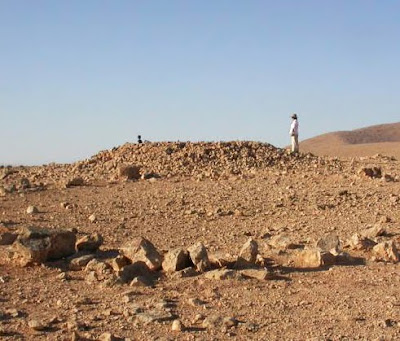 One of the corbelled stone structures found in the Syrian desert.
Dr. Robert Mason, an archaeologist with the Royal Ontario Museum, believes he has discovered an ancient landscape at the Deir Mar Musa al-Habashi monastery in the Syrian Desert, consisting of stone circles, stone alignments and what appear to be corbelled roof tombs.

From stone tools found at the site, it’s likely that the features date to some point in the Middle East’s Neolithic Period, a broad stretch of time between roughly 8500 BC and 4300 BC.

It is thought that in Western Europe megalithic construction involving the use of stone only dates back as far as 4500 BC. This means that the Syrian site could be older than anything seen in Europe. Mason described his shock at discovering the apparent tombs, stone circles and stone alignments: “I was standing up there thinking, oh dear me, I’ve wandered onto Salisbury Plain.”

Click here for the complete Independent article.
Posted by Gregory LeFever at 7:49 PM