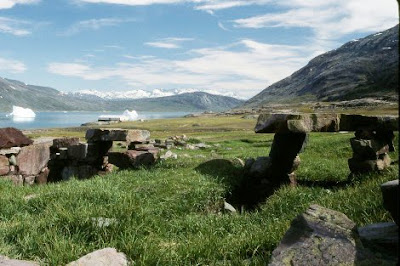 Presumed Viking ruins in southern Greenland.
Analysis of DNA from a Viking gravesite near a 1,000-year-old church in Greenland reveals that those buried there had strong Celtic bloodlines, probably originating from the British Isles.
Danish archaeologists are currently conducting the first regional study of southern Greenland’s original settlers, whose colonies date back to the year 985. The skeletons disinterred outside the old church also date back to just a few years after that period.
“Initial results somewhat surprisingly suggest that the people in the graves were more Celtic than Nordic,” says Jette Arneborg, curator and senior scientist at the National Museum. “We’ve always known that Norsemen travelled a lot and we also know that the early inhabitants of the Faroe Islands and Iceland had traces of Celtic genes. But now we also have evidence of this in Greenland as well.”
Although the DNA analysis reveals the inhabitants had Celtic blood in their veins, Arneborg said there was no question that the settlers were Nordic. “Everything these people did ~ their culture, means of nourishment and so on ~ was clearly Scandinavian,” she said.
Click here for complete article.
Posted by Gregory LeFever at 3:13 PM